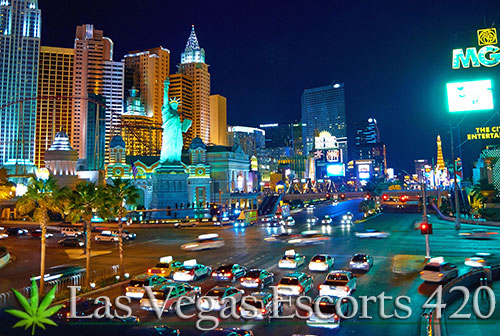 For a city that means "the meadows" in Spanish, how did a place with a picturesque, Bob Ross type landscape name to it (minus the happy trees) become known as Sin City? There is a rather interesting history to this. In fact, Sin City doesn't directly reference all of Las Vegas, but instead just a section of it. And as a side note, if you're outside of the United States, "Sin City" may refer to another town or section of a town (think red light districts). But in regards to Las Vegas, there is a unique history all its own. So, whether you're interested in current marijuana travel and the kind of Sin City rules found here in Nevada, or you just want a bit of a history lesson, here is everything you need to know about why Las Vegas is called Sin City.

The Origins of Sin City

The very foundation of Las Vegas and the idea of Sin City dates back to, more or less, the very beginning of the town itself. Following the completion of the Civil War, the United States wanted to connect the East and West Coasts with one, singular railroad (there were already railroads up and down the Eastern coastline, and in fact this helped the Union win the Civil War as President Lincoln took control of the railroad system in order to speed up the transportation of goods and troops. This is something that did not happen in the Confederate states as the railroads remained privately controlled, which slowed down transport, although that history is better told in a different blog on a different site). The Union Pacific Railroad set up different train depots to help with the rail line construction. Essentially, these train depots started off as a few physical constructions and tents for the workers.

A handful of service providers more or less followed the train construction as workers went and spent their money in these locations. This included those selling alcohol and prostitutes. Las Vegas (again, nothing more than a flat meadow at the time) blocked off areas in order to make it easier to find certain goods and services. Gambling, prostitution and other vices, all illegal at the time, set up shop at Block 16 and 17. This small area became known as "Sin City," because in a young nation built with an eye towards Christianity, the idea of prostitution, alcohol and gambling were all seen as major sins. The two block radius more or less became it's own small city within a growing population

Now, prohibition was in affect in the United States, and the government cracked down on gambling and prostitution along the East Coast. However, along the train line in Nevada, most railroad authorities turned a blind eye. These establishments helped keep workers happy, and it kept workers more or less poor, which meant they would continue their work for the railroad. It also brought out new employees from the East Coast who heard about paying jobs and the ability to partake in some of these frowned upon vices.

Now, the railroad continued on, yet many of the establishments remained. Las Vegas was close enough to the West Coast where it could receive goods without too much of a wait (unlike other destinations further in the center of the U.S.) and was far enough from the East Coast to not receive the blunt of federal law enforcement (the feds were busy going after organized crime in New York and Chicago...although Public Enemy Number 1 John Dillinger was arrested in Tucson by the local police department). So more and more people moved to the area.

This changed, at least a bit, in the early 1940s when the United States Air Force wanted to establish a base by Las Vegas. Thanks to the flat nature of the land, it made for an optimal location. The local government wanted to make it happen, as it would bring in all sorts of government contracts, although the government also knew it might cause problems with growing tourism. So, it made an agreement with the feds. It banned prostitution within the city limits, as long as alcohol was allowed.

That is the general history of how Las Vegas, or at least part of it, became known as Sin City. So now, whether you are coming for a weed holiday, are interested in a cannabis tour, or you and your friends want to we be high Las Vegas, you'll at least be able to school everyone you're around in Vegas trivia. Plus, if you're interested in some great weed and beautiful escorts, we'll have you covered as well.